We hold events and fundraisers so that our hospitals can continue to provide world-class care, regardless of the families ability to pay.

Shriners International is fraternity based on fun, fellowship and the Masonic principles of brotherly love, relief and truth.

“Nothing is more rewarding than to have someone stop you in the street and say that they or their child would not be able to walk now, if it weren’t for their care that they received at a Shrine hospital.”

A Mason or Shriner is dedicated to the tradition of brother helping brother. Learn more about how you can join and help others.

Jason was born July 12, 1974 in Springfield, Illinois, the second child of Terry and Jane Cutright. Terry is a Life Member of Clinton Lodge #19 and served as Potentate of Ansar Shrine in 1999. Jason’s Grandfather William F. “Bill” Shaw (Jane’s Dad) served as Ansar Shrine Potentate in 1981.

Jason grew up in Petersburg, Illinois and graduated from PORTA High School in 1993. Upon graduation Jason served in the US Navy aboard the USS America CV-66. He came back to Petersburg and started full time in the family business, The Petersburg Observer Co., Inc. where he still works today, alongside his mother Jane.

Jason and his Lady Angie live in Greenview and have 4 children, Seth, Teagan (Garrett), Maggie (Derek) and Cassidy.

They also have a granddaughter, Natalie. 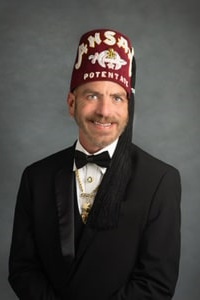 Shriners International is a fraternity based on fun, fellowship and the Masonic principles of brotherly love, relief and truth with nearly 200 temples (chapters) in several countries and thousands of clubs around the world. Our fraternity is open to men of integrity from all walks of life.